Just three decades ago, deaf children here in Bohol were either hidden at home or seen begging in the streets. Most of them were uneducated. They had no language and did not even know their own names. They were bullied and people often regarded them as mentally retarded. Parents of deaf children did not send them to school as they were unaware that there was any special education classes for them. Actually there was only one small class at Tagbilaran Central School. 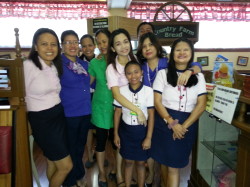 Though some knew about it, poverty hindered most in sending their deaf child to school. Additionally, in most cases, parents thought that education was not important for the hearing-impaired and that having a deaf child was just a misfortune and a burden the family had to bear alone. The Deaf were underestimated and were only left at home doing the household chores. In the worst case scenarios, they were shunned by their families, abused and isolated. These sad circumstances got the attention of Johnny Fisher, a Peace Corps volunteer who arrived in Bohol in 1979. He also encountered a Special Education (SPED) class with only 5 deaf students. Knowing that the best way to help the Deaf was to teach them sign language and education, Johnny requested for another volunteer who has knowledge in Deaf Education. So, in 1981, Dennis came along and both of them worked in conjunction with the local Department of Education in developing the Tagbilaran Special Education (SPED) Center. Moreover, they were sure there were still hundreds of unreached deaf children and young adults in the island of Bohol among the 800,000 population at that time. In 1982, they established a Philippine NGO (Non-Government Organization) known as Bohol Foundation for the Deaf and Disabled, Inc., (BFDDI). BFDDI initiated and undertook annual island wide surveys to locate and bring the Deaf to school. Later on, it provided student training on vocational courses (e.g. cooking, sewing, cosmetology, carpentry and masonry) and even organized a Deaf Festival. However, learning a language and getting an education wasn’t enough if they couldn’t find employment to support themselves and their families. Johnny and Dennis decided to look for ways to employ the trained Deaf. Johnny secured a small grant from USAID to put up a humble bamboo restaurant called The Garden Café in the year 1984 in collaboration with the Provincial and City Government. Former Tagbilaran Mayor, Ondoy Rocha provided the construction labor while the Provincial Government of Bohol graciously provided the lot beside the Tagbilaran City cathedral where it was built. The Garden Café started out as a Snack Center with only 5 workers. As it was located near the town square in Tagbilaran, it became a favorite hangout for friends and lovers with its special park ambiance and wonderful chicken/pork barbecue. As years passed, the Garden Café underwent a number of major renovations as it tried its luck as a donut shop, broasted chicken house, dimsum house, ice cream parlor, and pizza parlor. Then the day came when ICM and BQ malls opened. These were tough times for the little Garden Café restaurant as sales dropped to almost zero. The deaf workers were all afraid to lose their jobs. How could they continue supporting their families? It was then that Dennis decided to make Garden Cafe into a theme restaurant. Drawing on his Montana, USA cowboy roots, he changed the restaurant into an “Old West” experience. Today, it has become a landmark to locals and visitors alike with its Montana themed rooms offering International Cuisine. The waiters and kitchen staff are all hearing-impaired. Currently, it employs more than 30 workers. The Garden Café’s longest term deaf employee has been there for 33 years. All of the staff earn well above minimum wage, are enrolled in the Social Security System, Phil Health, PAGIBIG, and only work a 5 day work week. It is also noteworthy that all of Garden Café’s profits are funneled back into supporting the education of about 500 deaf students in Bohol and Leyte in partnership with International Deaf Education Association (IDEA) Philippines, Inc. and Leyte Island Association for the Deaf Inc. (LIAD). Most of its customers actually expressed their appreciation of The Garden Café this way:

“The Garden Café is like my second home. I come here twice a week. I’m happy to see that the Deaf are given the chance/opportunity to work despite their disabilities. At The Garden Café, people with disabilities have given their worth and dignity as a person to have their means of a good income.” “I’ve been here in Garden Café several times. The place is quiet, suited for long periods of reading with great classic music. The food is delicious at very affordable prices. I am happy being served by Deaf! The policy of the government for inclusive growth works! This may serve as an example to other business establishment to adopt the initiative of The Garden Café.” “It’s so heartwarming to eat in a restaurant that is a social enterprise at the same time, they help the deaf community by employing its members and supporting the education for the same.”

Indeed, Garden Café joins the government in upholding the rights and social equality of the People with Disabilities, as stipulated by the Magna Carta for People with Disabilities. To date, the restaurant is one of the few companies with the highest number of employed Deaf. Through the years of its existence, the way that the hearing community looks at deaf people has dramatically changed. Respect has been reaped and the acceptance of the Deaf in the mainstream society has now been made possible. The Deaf are now seen as empowered individuals! All it took was an opportunity and compassion to prove that YES, THE DEAF CAN.
This site uses cookies: Find out more.